Anu Malik should be off Indian Idol 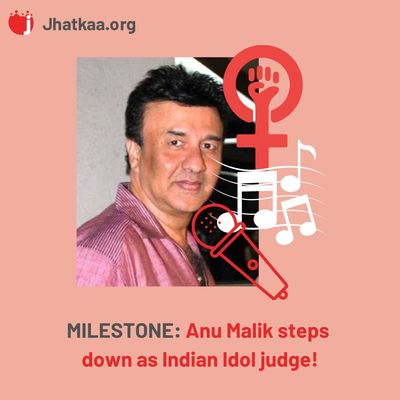 Sexual harassment accused Anu Malik has stepped down from Indian idol 11 on 21 November 2019. Jhatkaa.org had supported singer Sona Mohapatra's campaign on sexual harassment accused Anu Malik to leave the show till an investigation was on him. We also congratulate Sona Mohapatra for spearheading this campaign. To take the campaign forward, Singer Sona Mohapatra slammed the National Commission for Women (NCW) for closing her sexual harassment case on accused Anu Malik. NCW quoted lack of evidence as their reason for closing the case. However, Mohapatra clarified that she has been “painstakingly” gathering evidence and testimonies to send it to the NCW. For a statutory body like NCW to abruptly wrap up the case without proper investigation is in violation of the POSH regulations. We know that public pressure forced Indian Idol management to drop Anu Malik as a judge. It is the mandate of the NCW to ensure women’s safety is safeguarded. We are in touch with Sona Mohapatra who wants to connect with us to make progress on this campaign. We are awaiting a heads up from her on any strategic move. The National Commission for Women (NCW) also asked Mr Rohit Gupta, President of Sony Entertainment, to inform them about actions taken under the Prevention of Sexual Harassment of Women at Workplace Law regarding the case. We are continuing this campaign by asking Sony Entertainment to start an investigation on Anu Malik and adhere to NCW's mandates.