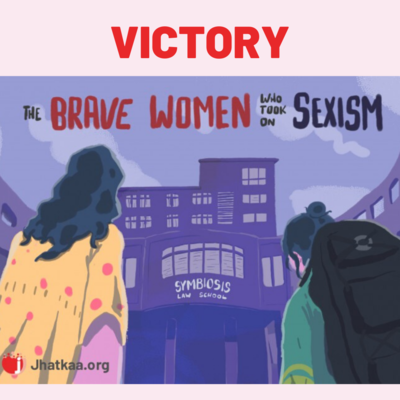 Apoorva Yarabahalli and Snigdha Jayakrishnan are back on Symbiosis Law School, Hyderabad (SLS-H) campus. What’s even better is that they are back without wasting the academic year.

What a year it has been! In November 2018, we reached out to the two students after they were suspended from SLS-H for accusing a professor of sexual harassment.

One year on, after multiple Twitterstorms, a viral comic illustration, media hits, phone calls, formal letters, we know our collective actions made an impact! Symbiosis has been forced to take sexual harassment seriously -- and what’s more, the National Commision for Women, Ministry for Women and Child Development and the University Grants Commission are closely following this case.

None of this would have happened without the support of our members. Make a contribution so that we can continue to tackle sexual harassment on college campuses.