Join the movement and volunteer for us Get them to understand the benefits of implementing the change STOP the Burn in Aarey 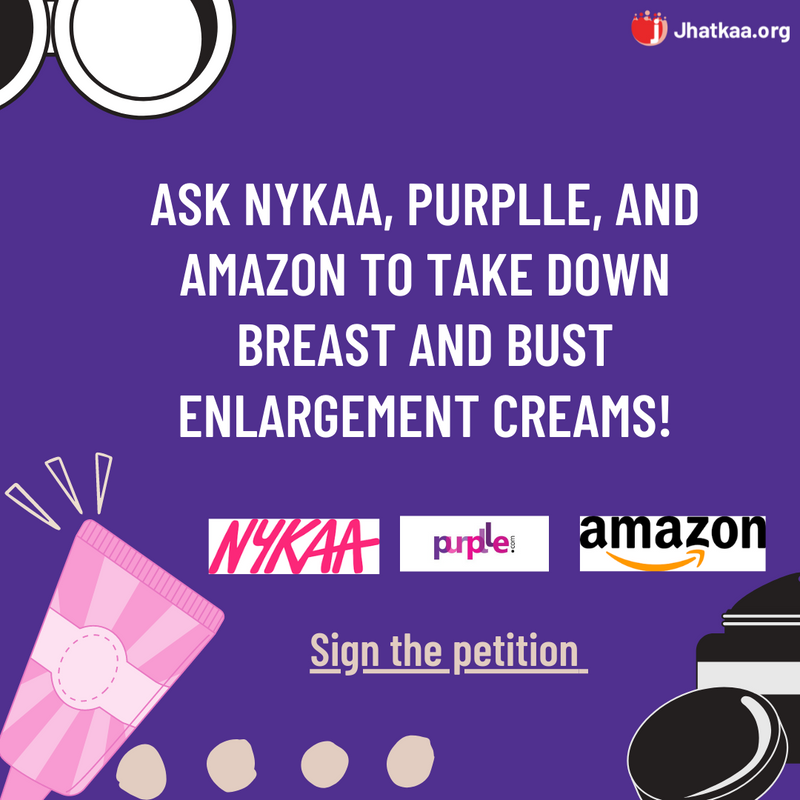 Ask Nykaa to take down breast and bust enlargement products Jhatkaa.org has combined their knowledge of policy with technology to address various critical issues that may affect communities locally, regionally or across the country. Through their innovative digital campaigns, they are empowering citizens to actively participate in the decision-making processes. These are highly effective in today's digital landscape. Such campaigns highlight the existing gaps in the system which often leads to an inclusive and active debate which is crucial for an equitable and sustainable environment. I am based out of Bangalore & having a background in tech and was tracking global and local issues as a common citizen, I was exposed to online petitions as a tool to provide information about social and environmental issues and garner public support. When I became an environmental activist full time in late 2019, I was very happy to know we have Jhatkaa.org in my own city ! Other than the online petitions itself, I was happy to interact with the team who engaged with citizens & communities to go further & enable them with data and also act as a bridge between the Government bodies and people to solve the issue itself. Hence, in early 2020, when I wanted to launch a petition with others, I naturally contacted the team at Jhatkaa.org. I was very happy to work with Nimisha, the Senior Campaigner from Jhatkaa who was not only helpful but also went beyond the technicalities of creating the campaign web page by taking deep interest in the issue. She did her own research, collaborated with a larger group of citizens, collated more data regarding the issue,also tried to organise meetings with the government officers who were the Decision Makers to hear the voice of citizens. Later on by sharing their experience with RTIs and even going to the extent of training citizens, Jhatkaa's campaigners put on-ground effort to keep the interest in the campaign & see that justice is delivered to the affected party (in this case environment !) I have known Jhatkaa.org from the day when Jhatkaa was one one of the three names that was in contention for a new baby in the world of campaigning and digital advocacy. In the last few years Jhatkaa.org lead by a team of passionate activists have established the organisation as a frontrunner in using technology for change that matters to people and environment. As the Juggernaut of development moves forward in India, Organisations like Jhatkaa will play an extremely critical role in ensuring that the important issues & voices get amplified and reach the right decision makers to protect that fine balance between economy and ecology. Jhatkaa.org has been doing great work in spreading awareness and taking action on issues of critical importance to society. Using digital campaigning methods, they reach out to citizens, highlight the importance of safeguarding our environment, air, forests and make sure citizens' voices are heard -- making sure development is inclusive and sustainable